caleephotography Smile! The world is a beautiful place (^_^)

Some random pictures I’ve taken with the Pentacon 50 mm lens… Have a nice week everyone! 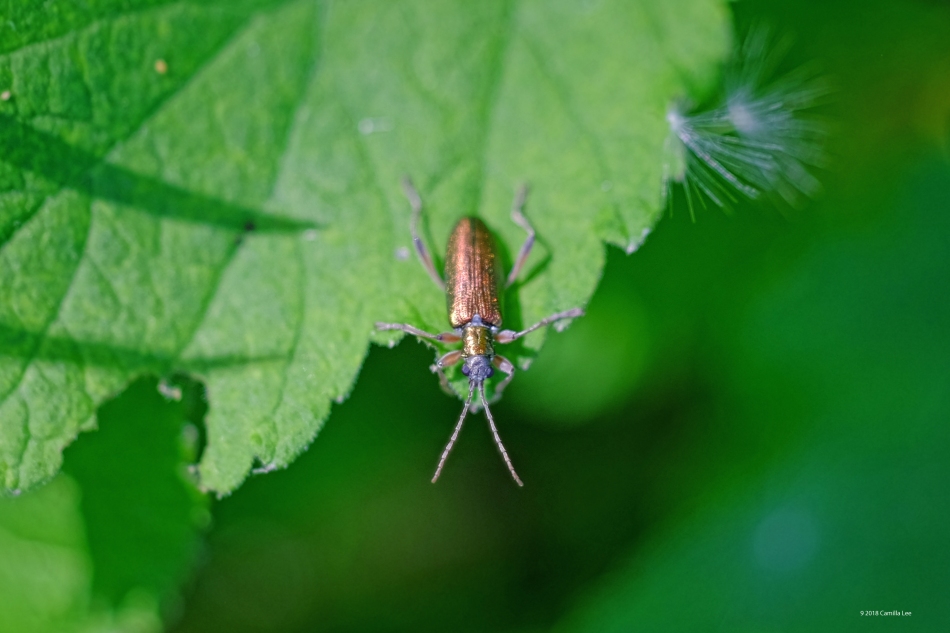 The Donacia clavipes has amazing colors!

HUGE eyes…. and a goatee!

The cardinal beetle is actually three different species of beetles.  The most common one is the Red-headed cardinal (Pyrochroa serraticornis), which is an orange-red beetle with a – duh – read head. It’s about 2 cm long and easy to spot as it kind of glows (in the closeup shot below you can see the color is kind of red metallic). The Black-headed cardinal (Pyrochroa coccinea) has a – uhm – black head and is rarer, slightly larger and its body has a deeper blood-red color. The third kind is the Scarce cardinal (Schizotus pectinicornis), it also has a black head but is less than 1 cm long.

Cardinal beetles prey on other insects, while their bright red color prevents them from being targeted by other predators because red usually means toxic in the bug world.

If you see a beetle with red wings and black underside and wonder if it’s a cardinal beetle or not, the easiest tell is to look at the antennae: Cardinals have toothed antennae. It’s often confused with the Scarlet lily beetle, which is smaller and usually found eating lily leaves. 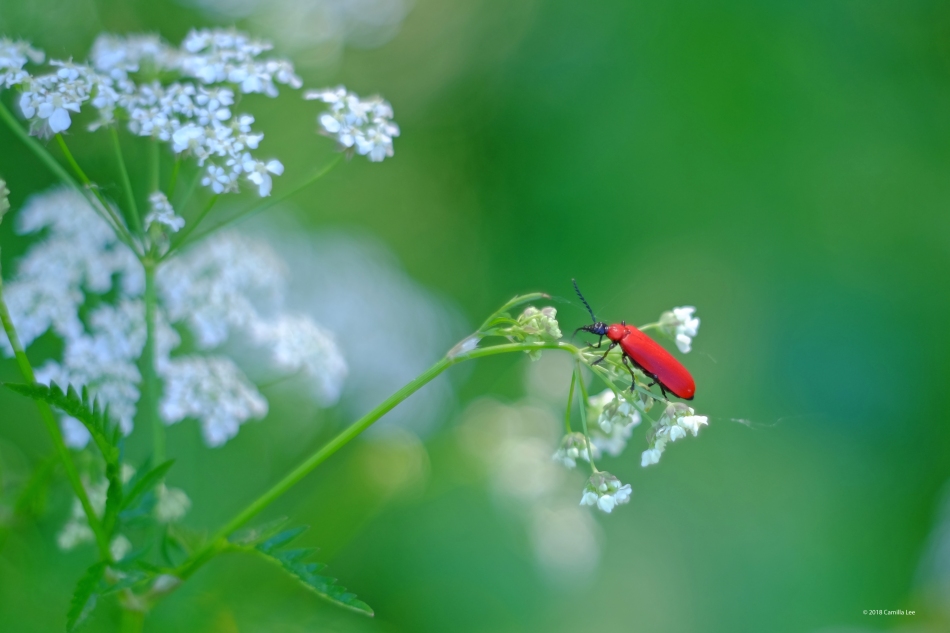 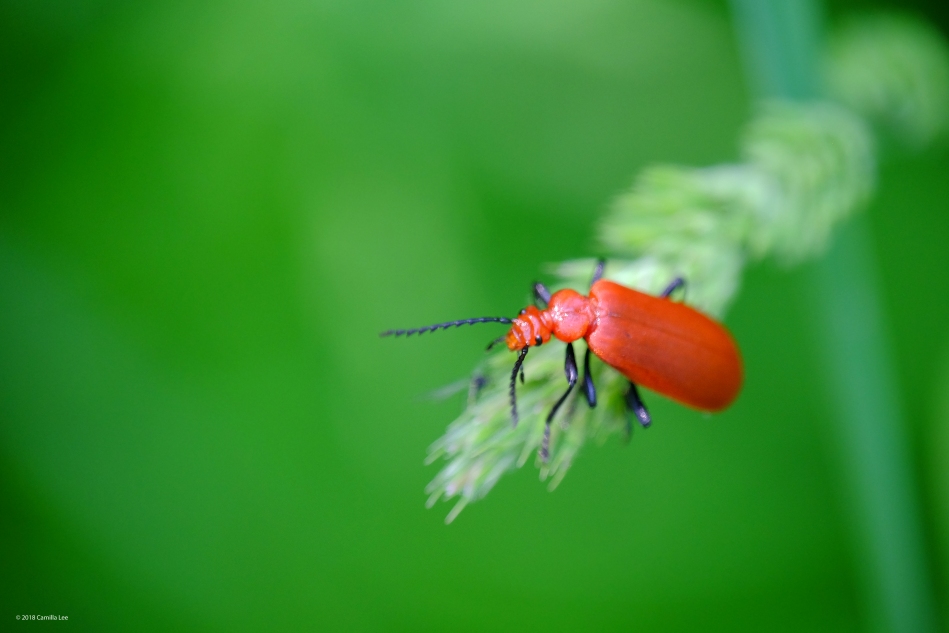 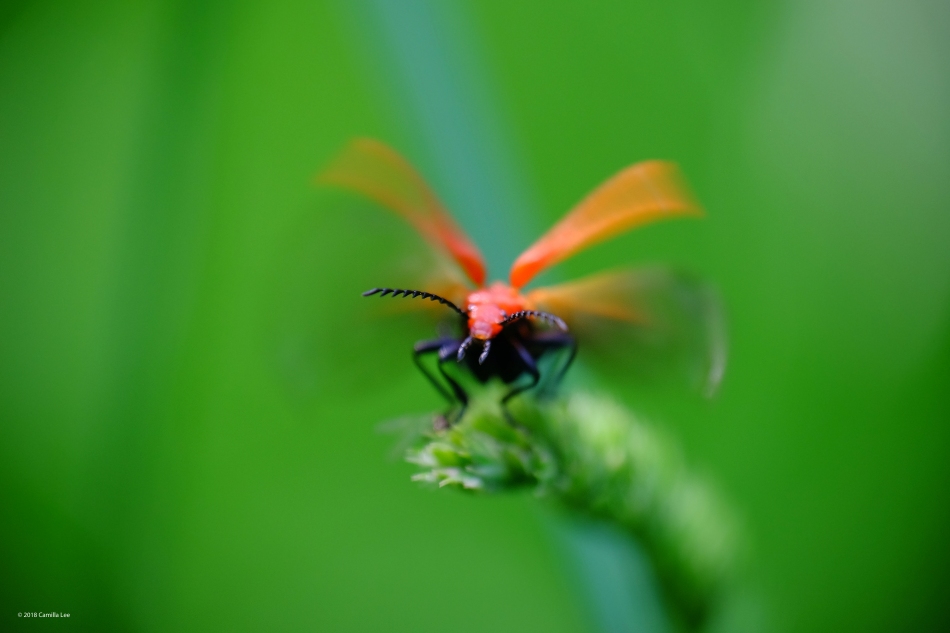 A failed attempt of photographing a flying cardinal beetle, but ended up with an interesting bokeh shot instead

Two close-up shots of a female Green dock beetle (Gastrophysa viridula), showing off her metallic shimmer, which can be gold green, blue, purple, violet, or red (depending on the light).

Why the name “dock” beetle? Because they mainly feed on dock and green sorrel. This makes them natural biological controllers and an ally to organic farmers (and an enemy of gardeners, as rhubarb is a dock plant).

How do I know it’s a female? Firstly, because she’s bigger (7 mm) than a male (~ 4 mm). Secondly, because she’s heavily pregnant! In the second picture, you can see that it looks like the her clothes are several sizes too small for her body, she’s so big that the wing cases have been totally displaced. She’s about to lay 1,000 eggs (yikes) that look like tiny rugby balls. More info & pictures in this blog post here. 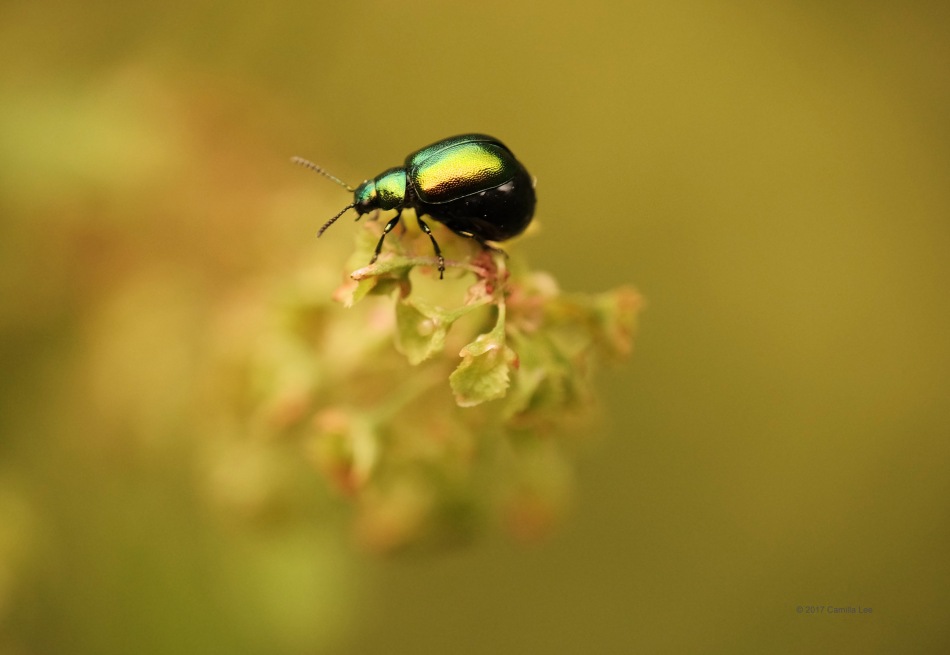